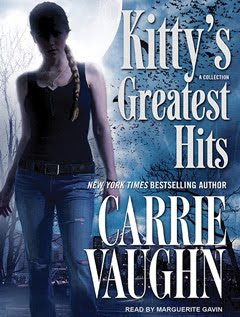 Synopsis
Kitty Norville, star of a New York Times bestselling series, is everybody's favorite werewolf DJ and out-of-the-closet supernatural creature. Over the course of eight books she's fought evil vampires, were-creatures, and some serious black magic. She's done it all with a sharp wit and the help of a memorable cast of werewolf hunters, psychics, and if-not-good-then-neutral vampires by her side. Kitty's Greatest Hits not only gives listeners some of Kitty's further adventures, it offers longtime fans a window into the origins of some of their favorite characters.

In "Conquistador de la Noche," we learn the origin story of Denver's Master vampire, Rick; with "Wild Ride," we find out how Kitty's friend T.J. became a werewolf; and in "Life Is the Teacher," we revisit Emma, the human-turned-unwilling-vampire who serves the aloof vampire master of Washington, D.C.

This entertaining collection includes two brand-new works: "You're on the Air," about one of Kitty's callers after he hangs up the phone; and the eagerly awaited "Long Time Waiting," the novella that finally reveals just what happened to Cormac in prison, something every Kitty fan wants to know.

KITTY’S GREATEST HITS is a collection of Kitty Norville short stories written by Carrie Vaughn. Some of these stories are recent and occur around the same time as the Kitty Norvile Series, while other stories help shine a light on your favorite characters pasts. Did you ever wonder how Cormac and Amelia found each other in prison or how Rick became a vampire? These short stories shed a light on unknown stories from Kitty and her group of friends.

My favorite short story of the bunch was "Long Time Waiting". I have a massive soft spot when it comes to Cormac. His time in prison was like a black hole in the storyline. Everything that happened inside the jail never come out, until now. I always felt that he and Amelia were such and odd pairing, but after reading this short story I really was able to understand. It was also nice to see that even though Cormac’s so dark, he has a place of light inside that basically no one could touch. It makes him more human.

My second favorite short story was, “Kitty and the Mosh Pit of the Damned”. This story most of all felt like a true Kitty Norville story. Kitty’s goes into a club to get a harmless interview with a popular local band, and gets herself in way over her head. It had the energy, wit, and mythos I have come to expect from this series. It’s always fascinating when Carrie brings new monsters to the party!

“Temptation of Robin Greene” was the most unique of the bunch. Robin is a scientist with observing and caring for a group of mythical creatures, including Kitty’s best-vamp cohort Rick. Everything changes for Robin when a a male selkie is brought into the lab. While I found this story haunting in the end, I just wished it had been a stand alone book. It was such an ingenious story line, I didn’t want it to end. Plus, I loved the role Rick played in this short story.

While I found most of the short stories to fascinating, some I had a hard time connecting the dots and finding their ties to Kitty’s world. And some had no connections what-so-ever, which confused me. I wish that their had been an introduction at the beginning of each story explaining it’s importance.

As the narrator, Marguerite Gavin has an uncanny ability to really set the perfect mood for a story. Whether bright and cheery or dark and mysterious, she is able to transport the reader alone for the ride. Marguerite’s wide range of character voices brings each story to life in my head. I also find myself forgetting that this series is narrated by a female narrator alone, because she does a wonderful job voicing each male so flawlessly.

While I connected with some short stories more then others, I enjoyed listening to them as a whole. I would defiantly recommend this audiobook to anyone who loves Kitty and her cast of characters. KITTY’S GREATEST HITS was fantastic chance to revisit past and present characters from Kitty’s world and getting to know a little more about each one! 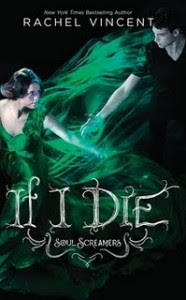 The entire school's talking about the gorgeous new math teacher, Mr. Beck. Everyone except Kaylee Cavanaugh. After all, Kaylee's no ordinary high-school junior. She's a banshee—she screams when someone dies.
But the next scream might be for Kaylee.

Yeah—it's a shock to her, too. So to distract herself, Kaylee's going to save every girl in school. Because that hot new teacher is really an incubus who feeds on the desire of unsuspecting students. The only girls immune to his lure are Kaylee and Sabine, her boyfriend's needy ex-girlfriend. Now the unlikely allies have to get rid of Mr. Beck…before he discovers they aren't quite human, either.

But Kaylee's borrowed lifeline is nearing its end. And those who care about her will do anything to save her life.

IF I DIE is the absolute best book in the Soul Screamers series so far! There are two things I have come to expect from Rachel Vincent’s books. First, expect the unexpected. She has an impressive ability to break genre rules and work outside the box. And second, her books have an uncanny ability of breaking my heart into teeny-tiny pieces. Couples are never promised a Happily-Ever-After and no character is untouchable by death or injury. IF I DIE didn’t let me down.

Rachel Vincent starts this book out with a bang. She tackles a very serious life and death issue within the first couple chapters. It hooked me in and couldn’t put this book down. It was an emotionally tough for me to read, but was extremely well written. She handles these issues in a very delicate and real way. It has probably never been said that Rachel shies away from controversial subject matter

Kaylee has once again found herself sinking in quicksand. Her life is falling down around her. Her friends and family are trying everything they can to help her out of an impossible situation. She has grown emotionally from book to book, and this book is no different. She excepts her limitations, and uses her energy, time, and skills to help her friends and family.

As always, Kaylee’s love life isn’t making things any easier. Kaylee and Nash are trying to get their relationship back after some bumps in the road. They are trying to move on, make new memories, and forgive past indiscretion. Then there is Nash’s mara ex-girlfriend Sabine, who is torn between stealing Nash from her and wanting to be Kaylee’s friend. Kaylee isn’t sure if she can really trust Sabine when the chips are down. Not to mention Nash’s sexy brother Tod, the reaper who is always there to help when Kaylee is in need. He has become her white knight, but instead of wearing shining armor he’s dressed in his pizza delivery uniform.

Rachel Vincent has a knack of turning her fictional worlds up-side-down, and making them all the better for it. Things happen that I never see coming. She has a way of finding unique and ingenious solutions to problems. This always keeps me guessing. The last few chapter of this book shattered my heart, but gave me hope for Kaylee’s future.

IF I DIE is heart-wrenching, shocking, and whispers of new beginnings to come! This book is a real game changer for this series. Bravo Rachel Vincent, you have skillfully develop characters that the readers can‘t help but be emotionally attached to! This book has cemented the Soul Screamers series on my must read list. If you enjoy reading unique and thought provoking Paranormal YA, you should picked up Rachel Vincent’s Soul Screamer’s series!