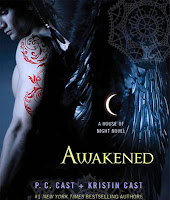 "Exonerated by the Vampyre High Council and returned to her position of High Priestess at Tulsa’s House of Night, Neferet has sworn vengeance on Zoey. Dominion over Kalona is only one of the weapons she plans to use against her. But Zoey has found sanctuary on the Isle of Skye and is being groomed by Queen Sgiach to take over for her there. Being queen would be cool, wouldn’t it? Why should she return to Tulsa? After losing her human consort, Heath, she will never be the same—and her relationship with her super-hot warrior, Stark, may never be the same either.

And what about Stevie Rae and Rephaim? The Raven Mocker refuses to be used against Stevie Rae, but what choice does he have when no one in the entire world, including Zoey, would be okay with their relationship? Does he betray his father or his heart?

In the pulse-pounding eighth book in the bestselling House of Night series, how far will the bonds of friendship stretch and how strong are the ties that bind one girl’s heart?"

(THIS REVIEW CONTAINS MINOR SPOILERS)
*
*
*
*
*
*
*
I am and probably always will be, torn by this series. I loved the first three House of Night books. They set up this dark, unknown world of vampire fledgings. The series started with smart and refreshing characters. Unfortunately, I feel like the writing duo of P.C. and Kristin Cast have taken this fresh take on a YA vampires in a drastic direction.

This series can’t seem to make up it’s mind, whether it is a Young Adult or and Adult series. On one hand, this series covers very adult sexual subject matter, while the way the teens speak is very juvenile. Zoey can’t stand to say words like ’crap’, but she’s doesn't mind being involved with more then one character in this series at a time. I just cannot wrap my mind around some of the writing in this book. This may come from the fact that it is co-written by a young adult and an adult.

I find that this storyline jumps around so much. I think that it comes from the fact that, this series has gone from one narrators, to several narrators. I find this extremely distracting to the story. And every time a new character gets their first “I’m so happy” chapter, is means that this character will meet an untimely demise in said chapeter. It makes the story extremely predictable. I saw both “shocking” deaths coming a mile away, due to the translucent writing.

The brightest spot of this audiobook for me is the narration by Caitlin Davies. She does an amazing job voicing this cast of both teens and adults. She also has a great ability to convey both the joy and sorrow that this book contains. I have to say that Caitlin is the best narrator that The House of Night series has had so far.

All of these things aside, I still keep picking this series back up. I’m drawn to finish and see where Zoey and crew end up. The beginning drug a little, but once I got to the halfway point of the story it really moved along quickly. I started to get back into enjoying this series and it’s characters. I think that I’m going to give this series another chance with the next book.