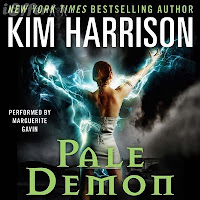 To save her life, bounty hunter and witch Rachel Morgan must overturn a death sentence, outwit a demon assassin, and endure a cross-country drive with a vampire, an elf, and a pixy in this latest kick-ass adventure in the Hollows series. Condemned to death for black magic and shunned, Rachel Morgan has three days to somehow get to the annual witches’ conference in San Francisco and clear her name. If she fails, the only way she can escape death is to live in the demonic ever after … for ever after.

Banned from the flight lists, Rachel teams up with elfin tycoon Trent Kalamack, headed for the West Coast for his own mysterious business. But Rachel isn’t the only passenger along for the ride. Can a witch, an elf, a living vampire, and a pixy survive in one car for over 2,300 miles—and that’s not counting the assassin on their tail. For a fearsome demon walks the sunlight, freed after centuries of torment to slay the innocent and devour souls. But his ultimate prey is Rachel Morgan. While the fearless witch will do whatever it takes to stay alive, even embracing her own demonic nature may not be enough to save her.

An elf, a witch, avamp, and a pixie walk into a restaurant. No this isn’t a joke, it’s Pale Damon, the ninth book in Kim Harrison’s Hollows’ Series. Rachel Morgan, shunned witch and paranormal bounty hunter, is on the road-trip from hell with her business partners Jenks and Ivy along with everyone’s favorite sexy elf Trent Kalamack.

Rachel had so much to overcome in this book. She’s a shunned witch with very little chance of making it through this road-trip alive. She’s making smarter choices, and finally tapping more into her demonic sidee. I was happy to see that she is starting to see that her demonic nature isn’t always a bad thing, as long as she used her powers for good purposes.

As in every Hollows book, Rachel love life is in shambles! It seems like the only person Rachel didn’t kiss/make-out with was Jenks, and I’m pretty sure that if he had been big enough she might have tried. All of these possible love matches, and she can’t find love again (R.I.P Kisten). My heart breaks for her! However, I was a little unsettled by Rachel’s lack of feelings towards Pierce in the first half of this book. It was almost like he didn’t exist. I love Rachel and Ivy’s bittersweet ‘good-bye’ scene. It was so heart wrenching and full of tightly held emotions. It brought me to tears. I have to admit, that at times in this series I have wanted Ivy and Rachel to be together.

As much as have fantasized about Rachel and Trent together, I shocked at how I loved their dream/reality make-out scene. I never thought I’d see the day that Trent cared about someone other then himself. He was the real stand-out character in this book for me. His character grew by leaps and bounds. He was not only able to work his way into Rachel’s life, but I believe he has gained Jenks’ trust. Plus, who would have guessed that Trent would be a father!!! I’m not going to lie, but for a minute I may have pictured Trent, Rachel and the baby as a happy little family.

I had two minor problems with this book. First, I felt that Pierce was ignored for the most part of the beginning of this book. I really loved the relationship blossoming between Pierce and Rachel in the previous book, and I was let down by his absence. Once he was brought back into the story, I felt that he was overlooked. Second, I was also annoyed at the way Rachel reacted to him. She had already taken herself out of the relationship mentally before it really even had a chance. Very sad!

I absolutely adore Marguerite Gavin’s narrations of The Hollow’s series. Hearing her narration Pale Demon felt like going home again. She is The Hollows to me. Even when I read this series, I can almost her reading the story to me. She does such an amazing job narrating the many Hollows characters that span different cultural backgrounds and eras. Her voice really draws you into the story with her emotional narration.

I believe that Kim Harrison stated on her blog, that this book is her favorite of the series so far, and I whole-heartedly agree. This book was not just a road trip, but story filled with personal growth, friendships forged, and trust cemented. If you are a fan of this genre and haven’t yet picked up The Hollow’s series, run right out and pick it up now!

1- Dead Witch Walking
2- The Good, The Bad, and The Undead
-- Undead in The Garden of Good and Evil--Ivy novella in the anthology Dates From Hell.
3- Every Which Way But Dead
4- A Fistful of Charms
-- Dirty Magic--Mia short story in the anthology Hotter Than Hell.
5- For A Few Demons More
-- The Bridges of Eden Park-Kisten/Rachel short in the US mass market edition of For a Few Demons More
-- Two Ghosts for Sister Rachel--Robbie/Rachel/Pierce novella in the anthology Holidays from Hell
6- The Outlaw Demon Wails
-- The Bespelled-Ceri/Al short story in the US mass market edition of The Outlaw Demon Wails
7- White Witch, Black Curse
-- Ley Line Drifter--Bis/Jenks novella in anthology Unbound
8- Black Magic Sanction
9- Pale Demon

Shaman-for-hire Eugenie Markham is the best at banishing entities trespassing in the mortal realm. But as the Thorn Land’s queen, she’s fast running out of ways to end the brutal war devastating her kingdom. Her only hope: the Iron Crown, a legendary object even the most powerful gentry fear…

Who Eugenie can trust is the hardest part. Fairy king Dorian has his own agenda for aiding her search. And Kiyo, her shape-shifter ex-boyfriend, has every reason to betray her along the way. To control the Crown’s ever-consuming powers, Eugenie will have to confront an unimaginable temptation--one that will put her soul and the fate of two worlds in mortal peril…

My Review
(THIS REVIEW CONTAINS SPOILERS)
*
*
*
*
*
*
*
*
Eugenie Markham is a girl torn between two worlds, two men, and the two halves of herself. While she has stepped up in her duties as the Thorn Lands queen, she is beginning to neglect her shaman duties in the mortal realm. War is brewing, and Eugenie is smack dab in the middle of it. Who can she trust? Who has will have her back? And will it be the King or the Kitsune, to fully capture her heart?

The Dark Swan series and I have a iffy relationship in the past. I love Richelle Mead and her Vampire Academy and Georgina Kincaid series, so I picked-up this series. I’ve enjoyed this series, but not I didn’t fall in-love like I did with her other two series. I am very fond of Eugenie, Kiyo, and Dorian in their best moments, but sometimes I just want to chuck the book at the wall.

This book is the best in this series so far. It’s the obligatory book #3 in the series, so I knew it would be an emotional roller-coaster. I love how Dorian has stepped up to back Eugenie and the Thorn Land. I love how easy things can be between Eugenie and Kiyo in the real world. This series is fast paced and keeps me thinking three steps ahead of myself. I was so happy that Eugenie and her sister were finally able to come to understanding. It’s like Jasmine is being able to claim what little childhood she has left.

This story does have some small issue for me. I didn’t like that Eugenie was able to jump from Dorian to Kiyo so quickly. Eugenie gets angry at Dorian for doing exactly what you expect him to do. She was shocked and appalled at his behavior. Come on Eugenie, use the brain I know Richelle Mead gave you. I also saw the pregnancy coming a mile away!!! I mean what self-respecting 20-something female, doesn’t know antibiotics and birth control do not mix. That along with not having ‘actual sex’ with Dorian the last time they were together. I kind-of expect more of Richelle Mead’s writing.

One thing I find very interesting about this series, is that I am never sure whether Eugenie should pick Dorian or Kiyo. Usually, I gravitate to one romantic lead, and don’t change teams. As soon as I think I have absolutely mind made up that she should be with Dorian, he does something to screw it up and vise-versa. I can’t say that I have ever felt this strongly about a love triangle. I mean previous to this book I felt that both characters filled a part in Eugenie’s life: Dorian filled the fey part of her heart and Kiyo filled the human part of her heart. That being said, I was never sure either character could make her completely happy. I think that with Eugenie’s choice to embrace more of one side of herself, she may be drawing closer to one guy more then the other.

This is the first book in the Dark Swan series that can be help up the same emotional caliber, as her two other series. This book kept me on my toes all the time. You never knew who Eugenie should really trust, and who would end up stabbing her in the back.

LOST IN AUSTEN: What book would you like get lost in?

This weekend I found myself sitting on my couch with my bff, two small cartons of Ben & Jerry's, and Lost in Austen on mini-series on DVD. I mean, what girl doesn't want a little Darcy, Bingley, & Wickham in there weekend?

The plot centers around Amanda Price, who lives in present day London, with her lazy boyfriend Michael. When Amanda's life gets down, she escapes into the arms of Fitzwilliam Darcy and Jane Austen's Pride and Prejudice. One day, Amanda opens her bathroom door only to find her favorite heroin Elizabeth Bennett standing there. The two decide to swap lives. Amanda steps through a door in her bathroom, and finds herself plunged right into the beginning Pride and Prejudice. Amanda has to find her way through Ms. Austen's world, with out upsetting books time-line. Unfortunately, her visit does not go unnoticed by many of the male characters, and Amanda spends most of the movie trying to make sure that the right characters end up together.

I really loved this DVD. It was great seeing a fresh take on this Classical story. I also enjoyed finding out new details about old characters, that could only observed by Amanda. I particularly enjoyed the new look at Wickham and Mrs. Bennett's characters. This is a must have for all Jane Austen fans!

With Lost in Austen and books like Shannon Hale's Austenland, I started thinking to myself, "What book would I most like to find myself in?"

Since, Pride and Prejudice is already taken, I'll have to go with another of my favorites. I'd have to pick Laurell K. Hamilton's Anita Blake Series. I mean I wouldn't switch places with Anita, cause I am pretty sure I would need her to protect me! I love the series mix of mythical creatures with the present day. I think Laurell K. Hamilton has done such an amazing job in her world building, that she makes the vamps and weres seem like they belong in St. Louis.

Tell me what book or series you would most like to be a part of?
Posted by Heidikins79 at 7:25 PM 3 comments: