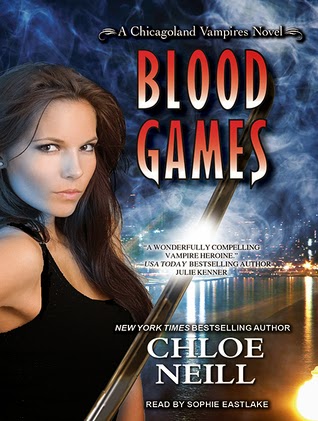 
While Merit didn't choose to become a vampire or Sentinel of Cadogan House, she vowed to fight for her House and its Master, and she's managed to forge strong alliances with powerful supernaturals across Chicago. But even though Merit has had wild adventures, this may be her deadliest yet.

A killer is stalking Chicago, preying on humans and leaving his victims with magical souvenirs. The CPD hasn't been able to track the assailant, and as the body count rises, the city is running out of options. Vampires and humans aren't on great terms, but murder makes for strange bedfellows. Can Merit find the killer before she becomes a target?

And here, I'd finally started to think that Merit and Ethan were on solid ground.  They were the closet that they have ever been to a functional romantic couple.  Usually, it's Merit that has a tendency to stumble in their relationship.  This time it was Ethan that needed someone to catch him.  His secrets were what pushed them a part this time.  It was nice to see that Merit got to be the strong one in the relationship.  This brings a new balance to their relations ship, that I feel has been lacking.  I liked getting the chance to see a more human sure for Ethan.

And as much as I love Merit and Ethan, this story would be nothing without it's secondary characters. They add so many unique layers to this story.  It's rare that you find a series with such a strong supporting cast.  I was happy to see that Mallory's friendship with Merit and her relationship with Catcher back on track again.  It's been a hard fought road for her, after the mistakes that she has made.  And who doesn't love the Omsbudies, especially Jeff!  He's smart, funny, and geeky, which makes him dreamy to most bookish girls.  I think this sexy shifter needs his own series. I'm also a massive Johan fan.  He is absolutely leading man material.  I like how we got to see his more relaxed side, especially at the convention.

I just can't get enough of Chloe Neill's Chicagoland Vampires Series.  These books stand out in sea of common paranormal romance.  I love this books snark, adventure, and heart.  It's a book that holds deep emotion, while also not taking it's self to seriously.  I enjoy the humor in a story, that could be otherwise to heavy with drama and emotions.  I got so caught up in this story, I can't put it down.

I have quickly grown to love Sophie Eastlake's narration of this series.  I'm such a stickler for changing narrator mid-series, that I'm not sure I gave her a fair shot in the beginning.  I am now a total convert.  She is the Chicagoland Vampire Series now.  She pulls off the perfect Merit, strong, snarky, and sexy.  She also has formed distinct voices for each character. Sophie is able to convey this series strong emotions from humor to it's strong heart. Her diction and pace are fantastic as well. She really pulls the listener into the story, and keeps them interested.

A high-fave to Chloe Neill for keeping this long running series so fresh and clever.  The Chicagoland Vampire Series is, hands down, one of the best Urban Fantasy/Paranormal Romance series out there!  I was so emotionally drawn into this story, that I couldn't put it down.  BLOOD GAMES is smart, snarky, and adventurous. It's both well written and well performed. If you are interested in fast-paced, edge of your seat paranormal experience, this is the book for you.  As always, I cannot wait for the next book in this series!
Posted by Heidikins79 at 4:29 PM No comments: 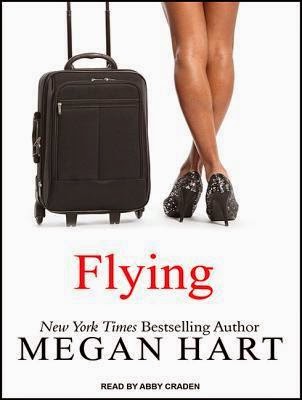 
Every other weekend, Stella buys a ticket on the next flight out of town and leaves her life behind. Home is a place with too many memories, and departure is the sweetest possible distraction.

As soon as she arrives at her destination, Stella visits the airport bar. She orders a drink and waits for the right guy to come along. A bored businessman, a backpacker, a baggage handler just off shift. If he's into a hot, no-strings hookup, he's perfect. Each time is a thrilling escape from reality that gives the term layover a whole new meaning.

When Stella meets the enigmatic Matthew in Chicago one weekend, she hits some serious turbulence. Something about him tells her that she's not the only one running from the past. The connection between them is explosive, and, for the first time, one taste is not enough for Stella. But returning to find a gorgeous man waiting for her is the easy part—facing the reason she's there is a whole other matter.

Stella got a really nice gift in her divorce settlement.  Her ex-husband, who runs a small airline, gave her free flights when ever she wants.  It's the best distraction she could have ever asked for.  She puts on a sexy dress, wig, and garter belts.  She puts on a front, so no one can see the real Stella.  Then she hops a flight to different locations to find random, no string attached hook-ups.  And for a weekend, she can escape the loneliness, past tragedy, and the monotony of her life.

I really enjoys the twists and turns of this story.  Stella is just barely holding onto her life by a single thread.  She just keeps trying to push through.  Since her divorce, her life has become stagnant.  She has a job that she's fairly good at, and she's raising a teenage rebellious teenager.  But emotionally, she keeps herself shut down.  Her bi-weekly hook-ups give her physical release, without her having to open herself up to anyone else.

On a random trips, she stumble a crossed Matthew in a bar.  She's not really sure why, but she tells him her real name.  Maybe it's the fact, that she's not wearing her usual disguise.  Or maybe it's Matthew himself.  He is the first guy she really let in, since her divorce.  He, unfortunately, is just as damaged as she is.  Can these two get through all that personal baggage, and find their way into each others hearts?

Megan Hart, has this innate ability to write such tragically broken characters. They seem more real to me, then in any other author books.  I also love how she tends to gives you bits and pieces of about the characters emotional damage, but waits until the end to reveal the entire back story.  She always draws me, and makes me care deeply for her characters.  Most of all, she writes thought provoking stories lines, in a world of cookie cutter romance and erotica.

Abby Craden was an amazing choice as narrator for this audiobook!  I wasn't sure that it was even possible, by Abby's narration makes this story even more sexy.  She has a very distinct, raspy quality that lends itself to this kind of storytelling.  She established very unique voices for each of the male and female characters. She was also able to carry this story's emotional highs and lows stunningly.  It takes a really emotional storyteller to carry one of  Magan Hart's books, and she is spot on.  I'm going to be adding Abby to my MUST LISTEN narrators list!

FLYING is a story of a damaged women learning to cope with her life, after a great loss.  This story is touching, sexy, and heart-breaking.  While it isn't my one of my favorite Megan Hart books, it still deserves space on my top shelf.  Hart was able to give the readers a real ending, without having to put a cheesy happily ever after bow on the story.  If you are looking for a realistic, emotional take on romance or erotica, this might be the book for you!
Posted by Heidikins79 at 1:04 PM No comments: