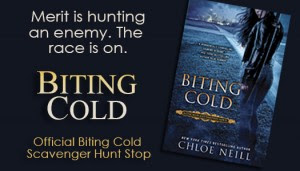 The Nice Girl's book blog has teamed up with fellow book bloggers as part of Chloe Neill's BITING COLD Blog Tour and Scavenger Hunt.  There will be reviews, and prizes, and a book quote...Oh my! 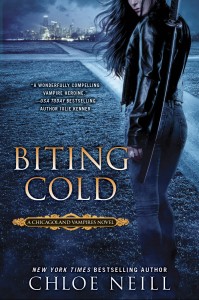 
Turned into a vampire against her will, twenty-eight-year-old Merit found her way into the dark circle of Chicago’s vampire underground, where she learned there was more to supernaturals than met the eye—and more supernaturals than the public ever imagined. And not all the secrets she learned were for sharing—among humans or inhumans.

Now Merit is on the hunt, charging across the stark American Midwest, tailing a rogue supernatural intent on stealing an ancient artifact that could unleash catastrophic evil on the world. But Merit is also the prey. An enemy of Chicagoland is hunting her, and he’ll stop at nothing to get the book for himself. No mercy allowed. No rules apply. No lives spared. The race is on.

Below, you’ll find a key word. Each participant in the Biting Cold Blog Tour has one, and when you put them all together in order, you’ll find a quote from a Chicagoland Vampires novel.
That quote is the passcode you’ll need to enter the Biting Cold Scavenger Hunt Giveaway, which will begin on August 11, 2012 on Chloe’s web site. The giveaway will end at midnight on August 17, 2012.
What are the Scavenger Hunt Giveaway prizes?

August 6, 2012
Reading and Writing Urban Fantasy and Paranormal Romance
All the Fun Starts After Dark

I've just recieved BITING COLD and lets just say it starts off with a real bang!  Check back next week for my review of BITING COLD.  Good luck readers and happy hunting!