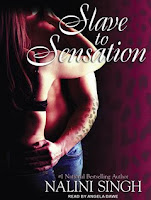 
Nalini Singh dives into a world torn apart by a powerful race with phenomenal powers of the mind-and none of the heart.
In a world that denies emotions, where the ruling Psy punish any sign of desire, Sascha Duncan must conceal the feelings that brand her as flawed. To reveal them would be to sentence herself to the horror of "rehabilitation" - the complete psychic erasure of everything she ever was...
Both human and animal, Lucas Hunter is a changeling hungry for the very sensations the Psy disdain. After centuries of uneasy coexistence, these two races are now on the verge of war over the brutal murders of several changeling women. Lucas is determined to find the Psy killer who butchered his packmate, and Sascha is his ticket into their closely guarded society. But he soon discovers that this ice-cold Psy is very capable of passion - and that the animal in him is fascinated by her. Caught between their conflicting worlds, Lucas and Sascha must remain bound to their identities - or sacrifice everything for a taste of darkest temptation...

Sascha Dunca is a broken Psy, but she can never let anyone know it. The Psy have been conditioned not to feel any emotions, and have varying levels of psychic powers. They see themselves as higher beings on the evolutionary chain then the Changelings (shape shifters) and the humans. If the Psy every discovered Sascha’s weekness they would rehabilitate her, which is a fate worse then death. Nikita Duncan is Sascha’s mother, a member of the Psy Council, and the head of the Duncan family. Nikita and Sascha are about to ink a business deal with Lucas Hunter, wereleopard and alpha of the DarkRiver Clan. Lucas has own agenda. He wants gather information on the Psy community and hunt down the Psy that has been kidnapping and murdering Changeling women. Can Sascha and Lucas see past their differences long enough to solve these murders and possibly form a friendship?

In a literary climate overwhelmed with vampires novels, Nalini Singh’s Psy-Changeling Series is a breath of fresh air! While I felt that the world-building in the beginning of this book felt a bit heavy, it was necessary to set up this extraordinary world. Believe me, it well worth pushing through the first couple chapters.

I love the complex and sexy character that is Lucas Hunter. At a very young age, he had to step-up into an alpha role, due to a per tragedy. He was smart enough to listen to the elders of his pack to help him do what is best for his clan. Not only is he strong physically, but he has a sensitive side. He believed in Sascha, even when she didn’t believe in herself. He helped her become who she was always meant to be.

The deeper that Sascha becomes involved with Lucas and the rest of the DarkRiver Clan, the more in-touch she becomes with her emotions and feelings. She has built up so many walls so that she can still pass as a normal Psy, that it was hard for her to see what she truly was. As a listener, it broke my heart to see Sascha spiral out of control. Even though she thinks she’s about to lose herself, she gives everything that she has left to help recover the missing Changeling.

This is my first audiobook narrated by Angela Dawe, and I was amazed by what I heard. Her ability to capture every character, from the cold Psy to the emotion-filled Changelings, was incredible! Her pacing and voice techniques were terrific.

I was completely captivated by Nalini Singh’s Psy-Chagelings world. She built layers upon layers of amazing primary and secondary characters. I cannot wait to see how they develop throughout the rest of this series. For those readers who also haven’t had a chance to check out her Guild Hunter Series, take this opportunity to dive into another well thought out paranormal-romance series.