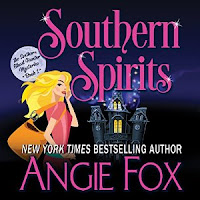 One simple mistake, for a girl who is about to lose her family home, releases the ghost of a long-dead gangster and opens Verity Long's eyes to a whole new world.

When out-of-work graphic designer Verity Long accidentally traps a ghost on her property, she's saddled with more than a supernatural sidekick - she gains the ability to see spirits. It leads to an offer she can't refuse from the town's bad boy, the brother of her ex and the last man she should ever partner with. Ellis Wyatt is in possession of a stunning historic property haunted by some of Sugarland, Tennessee's finest former citizens. Only some of them are growing restless - and destructive. He hires Verity to put an end to the disturbances.

But soon Verity learns there's more to the mysterious estate than floating specters, secret passageways, and hidden rooms. There's a modern-day mystery afoot, one that hinges on a decades-old murder. Verity isn't above questioning the living or the dead. But can she discover the truth before the killer finds her?

Verity Long can't seem to catch a break! First, she finds her fiance in an unforgivable situation.  She leaves him at the alter, only to have her vengeful ex-mother in-law to be send her the bill for the extravagant wedding.  To pay these bills, Verity has to sell everything, and will probably lose her grandma's antebellum mansion.  She's also been shunned for Sugarland's high society for leaving her rich ex-fiance.  And to ad insult to injury, she accidentally bound a prohibition era ghost to her property.  Things can't get any worse for Verity, or can they?

Verity is in a pretty bad place when the story picks up.  She's about to lose everything she holds dear, including her childhood home.  Down to her last penny, Verity doesn't spend a lot of time wallowing in self pity.  She picks herself up, wipes off the dust from her pretty sun dress, and fearlessly sets herself down a new path.  She's smart and resourceful.  She uses her gifts and pure grit to solve the mystery at hand.  I also loved how she was willing to give Ellis (her ex-fiance's brother) a chance, even though she had every reason not to.  Plus, how could you not love someone who has a skunk for a pet!

I really love the feel of this series.  It is a fast paced, quirky mystery.  It's all about small town, southern living.  This book also has a snarky sense of humor to it.  I really enjoy the mix of present day people and ghosts from different generations.  It adds deep history, that the South is known for.  It all just adds another level of depth to the story.

I have nothing but amazing things to say about Tavia Gilbert's narration.  She has to be on my Top 3 Must Listen Narrators List.  I picked this audiobook specifically, because she was the narrator.  Not all female narrators can pull off a believable male voice, but Tavia is one of the best in the business.  This audiobook really does sound like an ensemble performance, rather then just being performed by a single narrator.  Her narration style lends well to this stories sense of humor.  Tavia has a light hearted nature to her voice, but she can also handle the emotional parts of this story.  And her pace and diction are beyond compare.

The combination of Angie Fox's sassy writing style and Tavia Gilbert's exquisite vocal performance, make for a one heck of a thrilling ride!  SOUTHERN SPIRITS is funny, intense, and sweetly emotional.  If you're a fan of Molly Hart's paranormal mystery/romance series, this book will be right up you alley.  I finished this audiobook, and immediately ordered the rest of the series from Audible.  I'm sure I'll love them just as much as I loved this one!