Today, we are happy to bring you the Cover Reveal for K. Bromberg's upcoming novella RACED.  It is meant to be a companion piece to go along with her Driven Trilogy.

Also, check out the link below for a chance to win a Kindle Fire HD and other cool prizes from the author! 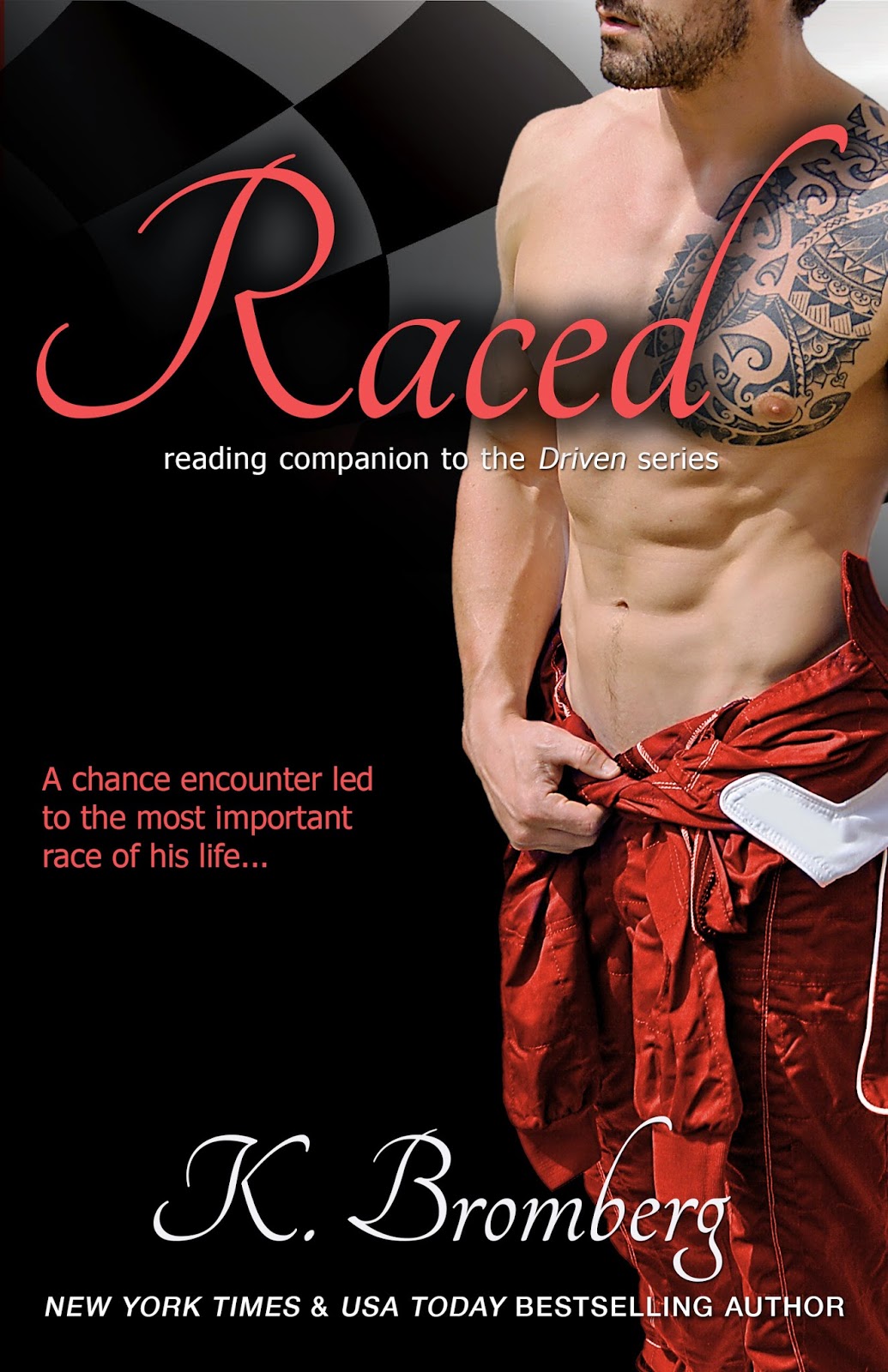 
From New York Times and USA Today bestselling author K. Bromberg comes a companion novella to the best selling Driven Trilogy (Driven, Fueled, and Crashed). This novella is a compilation of reader requested scenes from the series retold through the eyes of Colton Donavan.

Colton Donavan lived life in the fast lane, but it took Rylee Thomas to teach him what racing was all about.

You think you know me?

“Well, according to you, I took the checkered flag last night, Rylee...” I say as I take a step toward her trying to snap my thoughts in line, make up a reason for being here besides the need to make sure she’s okay when I could have just picked up the fucking phone. I resist the urge to reach out and touch her because I know if I do, my dick will rise to the occasion and do the talking for me. And fuck if I know what it will say.
She licks her lips, dick beginning to win the internal thought process when I suddenly figure out my angle – my in – my stupid ass excuse for showing up the morning after like some pussy-whipped douchebag. Because fuck, you can’t get pussy-whipped after just one taste. Shit like that takes time to acquire.
Or so I’ve heard.
This man might be drawn to the pussy palace but fuck if its queen will hand out orders that I’ll obey.
I take another step toward her, still undecided about my excuse for being here when I glance down momentarily and see her nipples harden through her tank. Well at least I know she’s still attracted to me. Let’s see if I can make her like me again. Give me another chance.
Bingo. Truth shall set me free. There’s the answer. I just want another chance when I’ve never wanted one before.
And therein lies the second question, another chance at what though?

Enter below to win a Kindle Fire HD, a signed copy of Bend (only signed by K. Bromberg), or a signed paperback (winner choice of Driven, Fueled, or Crashed). Life is full of moments. Big moments. Little moments. And none of them are inconsequential. Every single moment prepares you for that one instance that defines your life. You must overcome all your fears, confront the demons that chase you, and cleanse the poison that clings to your soul or you risk the chance of losing everything.

Mine started the minute Rylee fell out of that damn storage closet. She made me feel. Made me whole when all I thought I could ever be was incomplete. Became the lifeline I never knew I needed. Hell yes, she's worth the fight...but how do you fight for someone you know you don't deserve?

Colton has healed and completed me, stolen my heart, and made me realize our love's not predictable nor perfect—it's bent. And bent's okay. But when outside factors put our relationship to the test, what lengths will I have to go to prove to him that he's worth the fight?

Whoever said love is patient and love is kind, never met the two of us. We know our love is worth it—have acknowledged that we were meant to be—but when our pasts crash into our future, will the repercussions make us stronger or break us apart?

FUELED left the readers on the edge of their seat, so I couldn't wait to jump right into CRASHED.   We pick the story up right were we left off. Colton's car spinning out of control and Rylee fearing the worst.  She had already lost one love in a car accident, and she wasn't ready to lose a second.  She had only just got him to admit his true feelings for her, and he can't leave her now.  It's will take a lot to get her to leave his side.

This book absolutely exceeded my expectations!  It's my favorite of this series by far. One minute this book had me crying, and the next it had me laughing.  I loved how K. Bromberg was able to give Colton and Rylee their Happily Ever After, without turning her book into a cheesy romance novel.

Colton and Rylee were just made for each other.  Both are broken inside, and have had awful things happen to them.  Without each other, I believe that neither of them would have ever healed.  Their transformation in this story is amazing.  It was amazing getting to watch these two fight for each other.  It made the ending that much sweeter!


I usually don't enjoy audiobooks with dual narrators, this one actually worked for me. The story is told from two drastically different POV's.  Tatiana Sokolov is able to bring a soft, sweet tone to this story, while Sean Crisden brings a gruff, sexy tone. I think I have come to the conclusion that, the only way to do this story justice is with two separate, distinct narrators.  These two really bring the story to life.

CRASHED is a great mix of fast-paced adventure and heart-felt emotions. It's a story of adversity and fighting for what you really deserve in life.  This isn't your standard fluffy, serial romance. If you are looking for something a little deeper, darker, emotional roller coaster....this is it! I race you K. Bromberg!


While Merit didn’t choose to become a vampire or Sentinel of Cadogan House, she vowed to fight for her House and its Master, and she’s managed to forge strong alliances with powerful supernaturals across Chicago. But even though Merit has had wild adventures, this may be her deadliest yet...

A killer is stalking Chicago, preying on humans and leaving his victims with magical souvenirs. The CPD hasn’t been able to track the assailant, and as the body count rises, the city is running out of options. Vampires and humans aren’t on great terms, but murder makes for strange bedfellows. Can Merit find the killer before she becomes a target?

What I'm Most Looking Forward To

I love this series! WILD THINGS (Chicagoland Vampires Bk9) left me biting at the bit.  This is just one of those series that has the amazing ability to keep a strong series going for 10 books.  Each book is fresh and new.  I adore the way Chloe Neill can balance whit, sarcasm, and deep emotions.  And who wouldn't want to see more of the electric chemistry between Merit and Ethan!
Posted by Heidikins79 at 1:38 PM No comments:

Sydney Sage is an Alchemist, one of a group of humans who dabble in magic and serve to bridge the worlds of humans and vampires. They protect vampire secrets—and human lives.

In The Fiery Heart, Sydney risked everything to follow her gut, walking a dangerous line to keep her feelings hidden from the Alchemists.

Now in the aftermath of an event that ripped their world apart, Sydney and Adrian struggle to pick up the pieces and find their way back to each other. But first, they have to survive.

For Sydney, trapped and surrounded by adversaries, life becomes a daily struggle to hold on to her identity and the memories of those she loves. Meanwhile, Adrian clings to hope in the face of those who tell him Sydney is a lost cause, but the battle proves daunting as old demons and new temptations begin to seize hold of him. . . .

Their worst fears now a chilling reality, Sydney and Adrian face their darkest hour in this heart-pounding fifth installment in the New York Times bestselling Bloodlines series, where all bets are off.

FIERY HEART left my heart broken, and desperate for the release of SILVER SHADOW.  Just when things are starting to go right for Sydney and Adrian, the unthinkable happens.  Due to her close involvement with Adrian and the other Morois, her father and younger sister turned on her.  They helped the Alchemists kidnap and tear Sydney away from Adrian. Sydney is taken prisoner one of many Alchemist rehabilitation centers.  It kills Adrian to think about how Sydney must be suffering, and knowing that he can't help her if he can't find her.  Can Adrian find her in time? And if he does, will she still be the same Sydney that he knew and love?

This is absolutely the best book the Bloodlines series so far! Up until now, I wasn't sure if the Bloodlines series could ever with live up to the awesomeness that is Richelle's Vampire Academy series.  But this book does! It has so much heart and feeling behind it!  My emotions were all over the board.  There were heart breaking tears, throwing your book kind of anger, overwhelming happiness, and a jaw-dropping ending.  This book has it all!

The beginning of Sydney's captivity is just terrible and distressing. She is held in deplorable circumstances. Her captors used drugs to keep her docile and complement, all the while trying to get her to admit her behavior was despicable.  Not many characters could have kept sane through this.  Thankfully, Sydney is smart and very resourceful!  I was impressed by her more and more with each chapter,  I also really enjoyed getting to know her fellow detainees.  I'll be very interested to see how they figure into the future of this series.

While I found Sydney's part of this story was very sad, Adrian's part was tragic.  He had turned a corner after meeting Sydney.  He had changed and grown so much.  You just had to be so proud of his transformation.  It was like, if he had lost Sydney, he lost everything.  He jumped back into his drinking habits.  Watching his spiral out of control again was heartbreaking.  I love how we got the chance to go back to Cort and visit with some of my favorite characters, Rose, Dimitri and Lissa.  I think that Adrian needed this connection to home to finally give him the strength he needed to fight.

What can I say about the last quarter of this book? Amazing, touching, and then tragic.  I don't want to give to much away, but I will say that this book took a turn that I absolutely didn't expect.  It's all so perfect, that my heart was fluttering with excitement and exhilaration.  Then out of left field I was blindsides by the ending.  I was left in shock.

Bravo Richelle Mead!  She's outdone herself once again.  SILVER SHADOW had me on an emotional roller coaster from page one.  I couldn't put this book down.  I even brought it to work with me to read during my break.  Not sure how I'm if I can handle and anticipation of the next book in this series.  Hands down, I would absolutely recommend this series to anyone interested in  urban fantasy or paranormal romance. Although it's considered a Young Adult series, I think that it easily appeals to an older crowd as well.  So what's next? Not going to lie.  I'm probably going to download this book in audiobook edition, so I can live this book all over again.
Posted by Heidikins79 at 6:27 PM No comments: