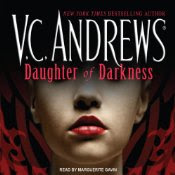 Seventeen-year-old Lorelei Patio is the adopted daughter of two-hundred-year-old vampire Sergio Patio. She never realized why her family has had to move so often or why she is not permitted to get too friendly with other young people. In fact, except for one shocking moment that seemed more like a dream, Lorelei never fully realized who and what her father was nor what her sisters were brought up to do for him. But one day, that all changed. Sergio’s "daughters" serve a very important purpose: they are all beautiful young ladies who can easily attract---and lure---men so that Sergio can feed on their blood. And now daddy expects Lorelei to be the obedient daughter he needs and bring him new victims.

But when Lorelei meets a shy, handsome young man named Buddy in school, she quickly falls in love with him. He feels the same way but wonders why she doesn't want to take him home to meet her father. Lorelei knows what will happen if she does and tries desperately to keep her two worlds apart, but she knows she can never truly escape her fate as a daughter of darkness. How will she manage these two worlds, and what will she have to give up to do so?

I actually spent a majority of this book torn between being creeped out and not being able to put this book down! If you are into dramatic vampire tales, this might just be the book for you. Even though this book is based around on a young adult, this book defiantly isn’t your run-of-the-mill teenage vampire tale! That being said, I actually wouldn’t ever recommend this book for young adult readers WHAT SO EVER. The topics discussed in this book can be very intense, dark, and somewhat disturbing for some readers.

I felt that this story developed very slowly, and the beginning dragged on a bit. Once Lorelie started to grow into her abilities, I really enjoyed reading about her personally. She was forced to grow-up fast, but bloomed into a beautiful, strong women. I also enjoyed the interactions between the sisters, even though it wasn’t a healthy familial relationship.

The best part of this audiobook was Marguerite Gavin’s narrations. I absolutely adore her, and picked-up this audiobook almost strictly because of her. I've loved her work on Kim Harrison’s Hallows Series, but I wasn’t sure how that would translate to a young adults voice. Marguerite blew me away, again! She did such an amazing job narrating this story. Her range of voices and emotions is unbelievable!

I’m on the fence when it comes to recommending this book. It was dark, strange, and creepy, yet at the same time I just couldn’t put the book down. It was kind of like a train wreck, you couldn’t help but watch. Not sure if that is a good thing or a bad thing. While I enjoyed this audiobook, but I’m pretty sure I won’t re-listen to it. The ending of this book leads me to believe that their might be a sequel in our future, hopefully it will be better.

Buy Daughter of Darkness on audiobook

Tantor Audio
Posted by Heidikins79 at 6:27 PM No comments:

AUDIOBOOK REWIEW: Jeaniene Frost's THIS SIDE OF THE GRAVE (The Night Huntress Bk 5) 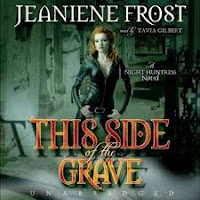 Danger waits on both sides of the grave… Half-vampire Cat Crawfield and her vampire husband Bones have fought for their lives, as well as for their relationship. But just when they’ve triumphed over the latest battle, Cat’s new and unexpected abilities threaten to upset a long-standing balance. With the mysterious disappearance of vampires, rumors abound that a species war is brewing. A zealot is inciting tensions between the vampires and ghouls, and if these two powerful groups clash, innocent mortals could become collateral damage. Now Cat and Bones are forced to seek help from a dangerous “ally”—the ghoul queen of New Orleans herself. But the price of her assistance may prove more treacherous than even the threat of a supernatural war—to say nothing of the repercussions Cat never imagined.

Unlike many of the other Night Huntress fans, I didn’t have a 2 year wait between DESTINED FOR AN EARLY GRAVE and THIS SIDE OF THE GRAVE. I was lucky enough to introduced to this series via audiobooks. When the this series was released at Audible.com late last year, I devoured each book as it was came out. This series is a witty, sexy, and emotional joyride, that you never want to end.

Cat’s really come into her own in this book. She didn’t want to hide or apologize for what she has become. She finally understands what it takes to be a leader and keep your people safe. Sometimes violence is the only alternative, when your authority is being challenged. She is also finally completely letting her walls down when if comes to Bones. She has always loved him and been attracted to him, but she’s always held a bit of herself back. She finally laid all her cards on the table for the husband.

As in all of the previous Night Huntress Series books, THIS SIDE OF THE GRAVE’s secondary character are just as amazing as it’s primary characters. I probably love Vlad just as much as I love Bones. He is hysterical! When he steps into a screen, you know you are in for a treat. He really is instrumental in helping Cat realize what it means to me a leader. It was also wonderful to get to see Night Huntress World characters Denise and Spade, along with Kira and Menchere. While it was great saying hello to old favorites, we also had to say goodbye an important characters. Though this character wasn’t always my favorite, he always did what he felt was right. He will be greatly missed!

I have always felt that Jeaniene Frost’s writing in The Night Huntess Series is bloody brilliant! She has a very good balance of humor, drama, sexuality, and heartfelt emotions. I mean who else could come up, “garlic plus ganja equaled ghosts be gone”? This book have sooo many amazing quotes from this book. One of my very favorites was, “Ask me if I sparkle and I‘ll kill you where you stand.” I honestly laughed out loud on the plane, while listening to this audiobook. I’m pretty sure the other passengers thought I was crazy!

If you are a fan Jeaniene Frost‘s series, I recommend that you pick up this series on audiobook. Reading this book and listening to it, are two totally different experiences. Never in my mind, could I dream up the amazing accents that Tavia Gilbert uses in this series. The characters range voices range from New Orleans honeyed French Creole to proper British gentlemen, and Tavia make them all shine!

If you are a big fan of the Urban Fantasy genre, this series is a MUST HAVE on your book shelf. I recommend Jeaniene Frost’s Night Huntress World series also. This series is meant to complement the Night Huntress Series, and give you a glimpse into the lives of some of my other favorite characters.


This Side of the Grave - Trailer