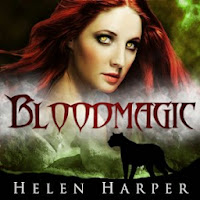 
After escaping the claws of Corrigan, the Lord Alpha of the Brethren, Mack is trying to lead a quiet lonely life in Inverness in rural Scotland, away from anyone who might happen to be a shapeshifter. However, when she lands a job at an old bookstore owned by a mysterious elderly woman who not only has a familiar passion for herbal lore but also seems to know more than she should, Mack ends up caught in a maelstrom between the Ministry of Mages, the Fae and the Brethren.

Now she has to decide between staying hidden and facing the music, as well as confronting her real feelings for the green eyed power of Corrigan himself.

Mack is on the run, leaving her pack and past far behind her.  She picks up odd jobs and fake names along her way.  She's trying to escape not just her past but, mostly the Brethren and their sexy Lord Alpha.  Mack ends up with a job at a dusty little book shop, owned by a strange little old lady who has a secret of her own.  Nothing could possibly go wrong there, could it?

I'm really loving this series!  It has a great mix of intriguing creatures, wit, and wonderful world building.  Poor Mack gets herself into one bit of trouble after another.  But I love her fairy spirit and personal strength.  She's not your standard damsel in distress.  She doesn't need Prince Charming, or the Lord Alpha, to rescue her.  I think that Helen Harper does a great job creating interesting secondary characters, who bring there own new spin to the story.  I do, however, wish that Mack's core group stayed more consistent.  I think that it would give the story little more depth.

The only thing I disliked about this book, is that she and the Lord Alpha aren't any closer to getting together.  It's making me crazy!  I just wanted a more of a tease to get me through to the next book.  The connection between these two characters, is probably my favorite part of this series. I know this isn't Paranormal Romance, but it their connection is just so intriguing .

Once again, Saskia Maarleveld's performance in this book is spot on!  Her accent almost teleports me to Cornwall, and it's surrounding areas.  She created such distinct voices for each of her characters, both male and female.  It's such an amazing talent to pull off a credible male voice, as a female narrator.  And Saskia does it  over and over again for each of the characters.  She also is able to convey all of this stories vast range of emotions, from it's light hearted humor to it's fear and terror.  I'm pretty sure I couldn't picture this series being narrated by anyone else.

Both Helen Harper and Saskia Maarleveld, make the decision to pick up book 3 in this series very easy!  The spectacular world and fast paced action, kept me on the edge of my seat.  Book 2 sets up a very interesting storyline for book 3.  I can't wait to see what Mack and Lord Shifty have in store for us.  If you are looking for a good Urban Fantasy, this is probably one for you.
Posted by Heidikins79 at 7:37 PM